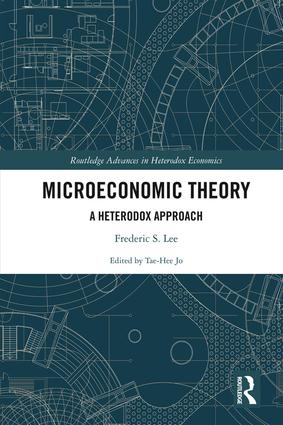 Microeconomic Theory: A Heterodox Approach develops a heterodox economic theory that explains the economy as the social provisioning process at the micro level. Heterodox microeconomics explores the economy with a focus on its constituent parts and their reproduction and recurrence, their integration qua interdependency by non-market and market arrangements and institutions, and how the system works as a whole.

This book explores the integration of these various theories with a theoretical model of the economy and how this forms a theory that can be identified as heterodox microeconomics. It will be of interest to both postgraduates and researchers.

Handbook of Research Methods and Applications in Heterodox Economics (2016) Despite the important methodological critiques of the mainstream offered by heterodox economics, the dominant research method taught in heterodox programmes remains econometrics. This compelling Handbook provides a comprehensive introduction to a range of alternative research methods, invaluable for analysing the data prominent in heterodox studies.

Providing a solid basis for a mixed methods approach to economic investigations, the expertly crafted contributions are split into three distinct sections: philosophical foundation and research strategy, research methods and data collection, and applications. Introductions to a host of invaluable methods such as survey, historical, ethnographic, experimental and mixed approaches, together with factor, cluster, complex and social network analytics, are complemented by descriptions of applications in practice.

Practical and expansive, this Handbook is highly pertinent for students and scholars of economics, particularly those dedicated to heterodox approaches, as it provides a solid reference for mixed methods not available in mainstream economics research methods courses.

Marx, Veblen, and the Foundations of Heterodox Economics: Essays in Honor of John F. Henry (2015) 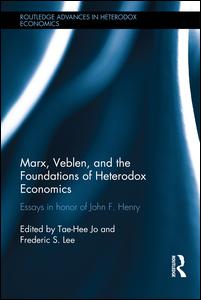 This book deals with the social costs of markets from a heterodox perspective. It deals with the degrading of work, decline of community, and rising income inequality in the United States as markets and especially financial markets come to dominate society. Of course, if there is an attempt to point out the social costs of markets, the response of mainstream economists is to silence the critics or even in Orwellian fashion redefine their critiques so as to eliminate any negative comments about markets. While critique is necessary, there also needs to be a constructive agenda, that is, the developing of an alternative, heterodox economic theory. So overall the book presents a critique of the social costs markets and the beginning of a heterodox economic theory of how the capitalist market system actually works.

Markets, Competition, and the Economy as a Social System (2013) Post-Keynesian and heterodox economics challenge the mainstream economics theories that dominate the teaching at universities and government economic policies. And it was these latter theories that helped to cause the great depression the United States and the rest of the world is in. However, most economists and the top 1% do not want mainstream theories challenged—for to do so would mean questioning why and how the 1% got where they are. Therefore, numerous efforts have been and are being made to discredit if not suppress Post-Keynesian and heterodox economics. These efforts have had some success; this book is a response to them.

This book makes it clear that Post Keynesian/heterodox economics is, in spite of internal problems, a viable and important approach to economics and that it should resist the attempts of the critics to bury it. The reader will also find arguments that directly engage the critics and suggest that their views/criticisms are vacuous and wrong. As such, this will appeal to all who are interested in economic theory, economic history and who believe in challenging the orthodoxy.

This book consists of nine essays that model the economy much differently than mainstream economics models the economy.

Evaluating Economic Research in a Contested Discipline: Ranking, pluralism, and the future of heterodox economics (edited with W. Elsner), Wiley-Blackwell, 2010; also appears as the 2010 November issue of the AJES.

This book challenges the view that using SSCI journal citations (especially its impact factor score) and peer review/evaluation are the best ways (in that they are the most objective ways) to evaluate economic research.

A History of Heterodox Economics (2009)

To celebrate the centenary of the most radical union in North America – The Industrial Workers of the World – this collection examines radical economics and the labor movement in the 20th Century. The union advocates direct action to raise wages and increase job control, and it envisions the eventual abolition of capitalism and the wage system through the general strike.

The contributors to this volume speak both to economists and to those in the labor movement, and point to fruitful ways in which these radical heterodox traditions have engaged and continue to engage each other and with the labor movement. In view of the current crisis of organized labor and the beleaguered state of the working class—phenomena which are global in scope—the book is both timely and important. Representing a significant contribution to the non-mainstream literature on labor economics, the book reactivates a marginalized analytical tradition which can shed a great deal of light on the origins and evolution of the difficulties confronting workers throughout the world.

This volume will be of most interest to students and scholars of heterodox economics, those involved with or researching The Industrial Workers of the World, as well as anyone interested in the more radical side of unions, anarchism and labor organizations in an economic context.

Frederic Lee sets out the foundations of a post-Keynesian price theory through developing an empirically grounded production schema. The administered, normal cost and mark-up price doctrines are explained in parts I-III of the book, as many of their theoretical arguments are important for developing the foundations. This involves discussing the work of Gardiner Means, Philip Andrews, and Michal Kalecki as well as the developers of the doctrines, such as Edwin Nourse, Paolo Sylos Labini, Harry Edwards, Josef Steindl and Alfred Eisner. Drawing upon the arguments and formal modelling offered by the doctrines, in conjunction with empirical evidence from one hundred studies on pricing and production, Dr Lee develops an empirically grounded pricing model and production schema. He argues that the model and the schema together constitute the foundations for post-Keynesian price theory.

A Monetary Theory of Employment by Gardiner C. Means (1994)